Has it been two years? Has it?

The silence was self imposed. It was a pact with Saturnian forces. Why not the Sun or the Moon? There was a lot of work to be done. Saturn at the time was in sagittarius, having just left scorpio. And by “just left” I mean it takes it three years or so to transit a sign so we’re talking about magic that takes three years to work since zodiacal magic tends to spring on the transits. Do you like long games? Saturn is the planet for you! If you happen to enjoy slow-burn sorts of solutions full well knowing this is going to take awhile and understand that Saturn is a slow, underworldly process of alchemical redemption and death, great. There were a lot of times I was tempted to blog about the mess and, frankly, brag, but the goal was to achieve something and the ego ultimately destroys magic. Magic is about doing something, and then letting it cook in it’s own way until you get the result. I think bragging is like opening the oven every five minutes to tell someone you’re baking a cake. I’ve said it before and it bears repeating: “To know, to will, to dare, to shut up“. (Yes I realize the irony of running a blog espousing this).

Since then, I’ve overcome a good amount of organizational resistance and brought order how I see fit to my personal universe. The celebration was a personal one. I don’t think it’s particularly fit to mention the circumstances or the players but the bottom line is that I ended up being initiated into the Gardnerian Coven my wife was presently a member of.

Now, these folks are cool, the high priestess doesn’t say “you can’t study this or that” or “you can’t be friends with these folks or your spouse or tell your spouse anything”, and there’s a good appetite for exploration, which is what got me originally hanging out with them. Its not a feminist cult which is where I think some wicca takes a left hand turn into a barn fire. I’ve written several times before about why wicca can suck on my blog and honestly, none of those things are happening in this group. In fact, the high priestess had to make a hard choice between tradition or postmodern awfulness, and she stuck with the tradition. That makes me extremely happy since I believe that modernism is a trap and compromise erodes things into an unrecognizable mess. There’s the notion of advancement – we have cars which in 100 years are still recognizable as cars – and there’s the notion of pollution, which is when cars suddenly sprout wings and become something else. To have the pure car experience, you’re really looking at “four wheels and moves along the ground”. The same sort of thing is visible here with the solomonic or enochian posts – rather than making “enochian runes” and other claptrap, I’ve really tried to give the systems a fair shake as written in the oldest material I could find. Similar to the previous arc also, things started out solomonic and moved into enochia and seem to be orbiting back to solomonic (or pagan, at least).

Will the blog become a Gardnerian blog? No. I think things are going to take a naturalist twist here. I’ve been extremely specific about ritual before and to contrast that, the Gardnerian ritual and material is only going to be spoken about in the most general of ways (which is to say – whatever Gardner published on Amazon…). On the other hand, I think it’s going to be really quite interesting to compare previous philosophy to where things currently sit. Specifically what strikes me from the last few rituals is the notion of physicality. If we want certain aspects to be presented to things in the circle, we place them in that quarter of the circle. It was an ah-ha moment I wonder why I had missed before. Sympathetic magic! Things assuming virtues of other things! I’ve written about this a hundred times and at no point did I say “lets move things around so they pick up virtues of where they’re placed.” Writing about it seems quite simple. In retrospect it seems quite obvious why a compass rose was never included in the diagrams of the circle of the Lesser Key. 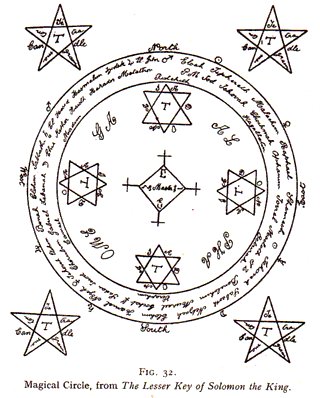 WordPress changed the image paste UI on me and I don’t really like it.

Why then, are there four six rayed stars in each of the cardinal directions and five rayed stars in each of the mutable directions? Well, you’re supposed to move around the mirror, of course, which is why it’s a circle and not an arrow. This bears experimentation later. Gardner was no dummy and was working with some good minds (Crowley) and some good organizations (Masonry). Gardnerian wicca, properly, does not exist in a vacuum and should embrace other sources and operations, and the one group had a really good class on the Thoth tarot, which was also a welcome discussion I enjoyed with the presenter long into that night.

If you’re familiar with the choirs of angels, or the original solomonic material, suddenly it becomes much smarter to place the mirror in the quadrant of the circle you’re interested in summoning from. So and so spirit rules over a particular quarter, the mirror goes there. Talking to a choir of angels from a particular quarter? The mirror goes there. The mirror is the proverbial telephone by which someone’s voice is made manifest. Now suppose you had someone video conferencing you, and you noticed the sun was a particular direction in the video. Wouldn’t you wish to place your phone in such a way that the image had the sun from the correct direction to make communication much more accurate, congruent, and enjoyable? In this way the circle and the articles in the circle lend a passive and practical role to the magical operation. Nifty. This notion also extends to other devices in the initiation circle where it almost seems like Gardner saw this in a very practical light when reading ritual material. Your lionskin belt is fitted to you, and it also happens to be made of lion, so to speak.

That being said, it’s a particularly interesting branch of magic in which the power isn’t like surfing – it’s not generated by observing the positions of the heavens and trying to guide the energy generated by the motion of the universe. It is a personal power, it’s something distinct to the group that raises it and I now believe the cone of power is real. I strongly suspect that Gardner was exposed to magical power (arguments the origin of which aside) and went to make the most practical system he could using the myths and material as he wanted to present them.

Last night I had the strangest dream…

After initiation, my High Priestess asked if I had any peculiar experiences in the circle. To that end, being psychic is a mode I can access when I’m in the right state of intoxication, but I was asked to eat lightly and refrain from substances. At the time, I had a notion of my aura (a white body) being pressed down, and from above a black egg entered me from the head. Beyond that I didn’t get much aside of the normal imagery where I can usually detect a “good” night from a “bad” night when we’re doing that. The lack of alcohol and such kept me firmly in the “here and now” sort of space. I was exhausted and that night I slept like the dead neither having dreams nor a sense of time. I did notice that while the ritual ended much earlier, I was missing about two hours I cannot trace to a particular event. We merely did the initiation and enjoyed each others company. I was thankful my wife drove home, I was beyond tired.

Two days later, I found myself in a thick wood, on a dirt path. Everything was verdant and green and the impression was that it was almost midday. Not hot, but bright in the way the forest gets when the leaves of the trees filter out the sunlight as though they’re so many outstretched hands. Traveling the path, I caught glimpses of a young, youthful, adolescent Pan. He was always just a bit beyond sight, never quite coming forth and never close. As I traveled the path a long distance, I became lost. There was a sense of a disconnect, but not a panic. I didn’t have a map, but I knew where I was roughly. It was akin to hunting in winter having done all the scouting in summer. Everything is familiar, but not readily recognizable in this particular mode. Pan had pipes in his hand, and finally draws me to a grove. The grove itself is huge, a grassy field, well used, and in the middle is a stone table with a fire in it. A blonde woman in blue, also youthful and well endowed takes me into the circle and there’s a sense of eroticism here. Shes wearing particular jewelry and a blue, deep diving robe with silver trim on the borders.

A ritual of a sort takes place with parallels to what I had just experienced but the preparation of the circle is notably absent. Why should there be a circle prepared? This is the native space of the spirits and there would be no circle cast where I scrying the place of any other spirit either. I am a guest here. Names are exchanged, confirming the authenticity of the dream in my mind.

1 thought on “Last Night I Had the Strangest Dream”